”Could the Swedish government be interested in an exchange of Jensen?”

This Mr X may have been the German Democrat lawyer Wolfgang Vogel or someone else who acted as representative of Russian Berlin Ambassador Peter Abrassimov. If it were not, then, that Abrassimov was Mr. X because the two were acquainted since 1963. The contact was then knocked on a cancer disk at the Finnish Consulate General in Berlin. 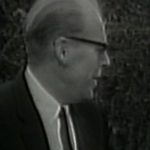 Svingel turns to Sven Backlund, closely known since becoming General Consulate in Berlin in 1964. Both with a close relationship with Berlin mayor Willy Brandt. Backlund’s first propo on a presentation in February 1966 to Foreign Minister Torsten Nilsson is left unanswered. In the second attempt, the s-tagged diplomat Backlund announced that ”although the enlightenment is a dead track, the enlightenment must be continued. I’m convinced it’s genuine ” .

”Give us Jakobsson and where is he ? ” Says Svingel as disgusted as Raoul Wallenberg. Mr X first says that Jakobsson does not exist. The contact person returned at the beginning of 1966, announcing that he has Moscow’s power of attorney to negotiate with Svingel about Wennerström.

On Svingel’s question, where Wallenberg is given, the reply is answered with the wish that Svingel explores the Swedish Government’s interest in releasing Wennerström. It makes Svingel believe that the replacement item is Wallenberg. This told Svingel to Foreign Minister Torsten Nilsson on February 22.

On March 15, Svingel receives a presentation for Prime Minister Erlander, Foreign Minister Nilsson, Sven Backlund, Governor Carl Persson and Otto Danielsson, Head of Säpos counterspionage. It became a blank no, although the two policemen thought the possibility should be explored. Who Mr. X would have used the courier Svingel not to reveal.

UD official Leif Belfrage wrote in a secret PM after the meeting: ”Neither the prime minister nor any of the others considered the least chance that Wallenberg could be recovered. It would be the biggest sensation in my life, said Erlander and it is completely unbelievable after all that has occurred.Backlund and I claimed that a definite no was the only possible reaction. I thought you should let the person understand clearly that we do not join us like this in our country. ”

Erlander had already decided to reject Svingel’s Belfrage before the meeting. Even for the police line that wanted to investigate, the cover was laid on. The singer Singer Singer was characterized by the Swedish bureaucrats as a special person. A simple old-age chief who spoke like a statesman! In each case as a gray eminence, which he actually became for the ministers Willy Brandt and Herbert Wehner in Bonn. And at the fall of the age at the royal couple speak with the language of an older kingdoms.

No more than PM from Belfrage and Backlund and a few handwritten letters document the meeting. Nothing was diarrhea but it was hid in the yellow cabinet of a Political Department’s Foreign Affairs Department. That was first opened in 1986 and came to public awareness first in the Wallenberg Commission’s report A diplomatic failure SOU 2003: 18 .

Why did Svingel’s prophecy become a non-event in the government office? Not a line if the visit was written in the newspapers. The price was too high to let Wennerström reveal to the Russians what he revealed in Swedish interrogation. At the same time, Erlander must handle growing opinion in support of the Wallenberg family’s efforts to gain clarity.

Nikita Khrushchev exploded Erlander during an individual conversation in Göteborg in June 1964 raised the question of Raoul Wallenberg. An insult when Niita’s son and so many others disappeared during the war. Had he known Erlanders rude he should have stayed at Moscow.

His dinner joke about a Swedish invasion of Ukraine became a pretext of polluting Khrushchev as head of government in October 1964. The answer to Wallenberg became even more pronounced during Vice President-General Kosygin’s State Visit in Stockholm the following year. After that trip, Aleksej Kosygin came increasingly in the darkness of Leonid Brezjev. (Boris Yeltsin was kicked up as a Russian president a few years after 1997  in Stockholm . Can such fate explain that Putin did not visit Sweden?)

Opinion grew to enable the investigation of Wallenberg. The pressure on the government would increase if Swings’ threes became widely known. As 1968 when the Russians pressed to get rid of Heinz Felfe, the spy infiltrating West German Säpo. Wolter Vogel, the GDR lawyer, attended several meetings with the All-German Minister of Justice Herbert Wehner in Bonn and Carl-Gustaf Svingel  in Haus Victoria. Had Vogel prevented Svingel to travel as a courier between west and east.

Vogel placed the cards on the table when he met with Herbert Wehner at Svingel in Haus Victoria on the first week of November 1968. No felfe, no more free kicks of prisoners from the DDR. The question of Vogel was also a messenger about Wallenberg was not disclosed, not even by Svingel after German reunification.

Erlander actualized Raoul Wallenberg when he, together with the Bundesförbund Gunnar Hedlund, made a state visit to Moscow in 1956. On the trip, Svenska Dagbladet’s editor-in-chief Allan Hernelius was married to television known later Jeanette von Heidenstam – and f Estland to Wallenberg just before joining Budapest in 1944 . In 1957, Foreign Minister Andreij Gromyko released documents claiming that Wallenberg died in Lubjanka in 1947.

Wallenberg was in stone for Erlander since it disappeared in 1945. Even more for the East Undén. Foreign Minister who was even worse offended against the Russians. In 1945, his Cabinet Secretary Boheman thanked the Russian Ambassador to Stockholm, Alexandra Kollontaj, for the Soviet army to save ”Wallenberg in Budapest” .

There were several livelihoods. At a conference in 1961, Professor  Nanna Svartz  , in his time friend of Kollontaj, told the physician Mjasnikov that Wallenberg lived. Svartz was also close friend of the von Dardel family, who in the Raul Wallenberg Academy fought to gain clarity. His mother Maj von Dardel and half-sister Nina von Dardel , married to Gunnar Lagergren – and their daughter Nane Annan, married the former former Secretary General Koffi Annan.

There were ties between the family and Carl-Gustaf Svingel? For Erlander, Svingel stated that he had been acquainted with Raoul Wallenberg. Jan Mosander writes in the book Berlin :

Swing’s long relationship with the family is reflected in Lagergren’s answer to Mosander’s question of Swing’s descent: ”We have heard in the family that Gustaf V was Swing’s father. I myself do not know what to believe but there are people in the Wallenberg association who think it’s true and not doubt the least. ”

Erlanders and the UD’s way of responding to Svingel get a blow in the investigation from the parliamentary composite Wallenberg Commission . Especially as Svingel’s contact with the Austrian representative continued.

Later in spring 1966, Svingel heard from the East Representative ”I will return to Wennerström, Wallenberg does not exist” . What Svingel interpreted that he was not dead. Although in June, the sagesman stated ”I do not think he lives … you have to make an offer” . In September, the contact would receive personal data, a wish that Svingel sent to the UD. Without receiving an answer stating that this already knew the Russians. Svingel was told by his correspondent in December.

Svingel realized that someone in the Government Offices leaked to Moscow. According to Soviet defenders there was a diplomat who was spy with the cover name Getingen. Säpos searchlight was directed against Wennerström’s head of the UD’s foreign policy department, Sverker Åström.

Säpo recorded that Wennerström and Åström were close to each other. The two went privately and had worked together at the embassy in Moscow. The suspicions  did not lead to anything, but Åström’s survival as gay lay him in the barrel. The suspicion of betrayal can explain that Åström was unlawful for years as a representative of the UN Security Council. Quarantine in the same way as Wennerström before arrest took Alva Myrdal’s disarmament work.

Svingel had a continuous contact with Mr. X. At the turn of the year 68/69 he asked Svingel if the Swedish government would not deny Wennerström and change him to a man they are interested in. After the answer ”He lives,” from Svingel, the answer came ”We are not negotiating about killing” . The UD does not respond to the information provided by Svingel.

A great deal of Svingel’s tasks are supported by criminal commissioner Otto Danielsson, who held contact with him until 1974. On behalf of Rikspolicf Carl Persons, Danielsson’s successor, Olof Frastedt, visited Berlin to follow up on  Carl Gustaf Svingel’s information  about Raoul Wallenberg. Despite the darkening of the UD.

Nikita Khrushchev threatened to go home the next morning when Erlander and Foreign Minister Nilsson in a single conversation addressed not only Wallenberg but also crews from Swedish ships as the Russians lowered in the Baltic Sea. The Prime Minister saw that nothing about Wallenberg and missing boats were written in the minutes.

The disappearance of m / s Kinnekulle gained such publicity in 1964 due to the activity of Mary Johansson’s fund led by widow to boat captain Bertil Johansson. A number of witnesses emerged with evidence that the crew was in the life of the 50’s. 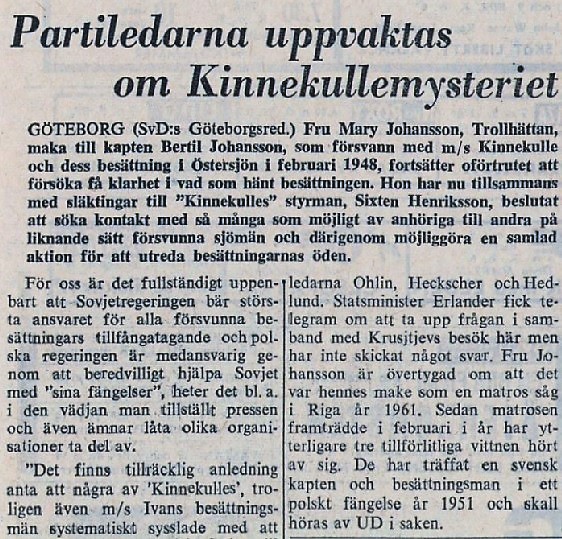 Carl Gustaf, now called Svingel, spent the summer of 1948 in Hjärtum, where he painted the house for a disabled seamstress. It was written about Kinnekulle in the Swedish press so he probably got a good knowledge of the case. Bertil Johansson was born in 1913 in Utby in the valley of Elva a few kilometers north of Hjärtum’s church. Carl-Gustaf Svingel was born as Gustav Samuelsson three years later in the grain farm.

Several witnesses thought they had information about people in Polish prisons, judging from  Kinnekulle  and Sten Sture. Both ships had left Ustka at the same time and then disappeared. The Poles denied that the Swedes were in prisons but they could leave cigarettes and food packages. Later they were abandoned by boat to Russia, probably in labor camps.

One who gave gifts was  Elna Gisted,  who first revealed his explorations after the Swedish sailors first in 1964. It got a lot of publicity and the Ministry of Foreign Affairs was actively called on to Foreign Minister Torsten Nilsson.

With a time shift, Gistedts and Svingels live around each other. In 1948, Gistedt gave cigarettes to Swedish prisoners in a Polish prison. Much speaks of the fact that there were sailors from the missing engine guns Ivan, Sture and Kinnekulle. The captain of Kinnekulle was Bertil Johansson, three years apart from the same town in Hjärtum as Svingel.

In 1964, a police report from Gistedt’s testimony was written , equally neglected by the Swedish Foreign Ministry, as Svingel’s invitation to exchange by Raoul Wallenberg two years later. The east contacts were one for hot potatoes.